We are starting to publish in this page information about archival, bibliographical and other resources, including from heritage sites available to explore the Hispanic-Anglosphere from the late 18th to the early 20th centuries.

‘Transition’ – full podcast, videos and report of the public event

Here you can find a full audiovisual record accompanied by a brief report of the public conversation entitled ‘Transition: tips and ideas from the Hispanic-Anglosphere (late 18th – early 20th centuries’ that was held on Saturday 11th May 2019 at the Wessex Center, Winchester. The event was organized by the Modern History Research Centre of the University of Winchester and our international research network  Speakers: Dr Andrés Baeza Ruz (Pontificia Universidad Católica de Chile), Dr Helen Cowie (University of York), Prof. Eduardo Posada-Carbó (University of Oxford), Prof. Natalia Sobrevilla Perea (University of Kent); chaired by Dr Graciela Iglesias-Rogers (University of Winchester).

Click HERE for the full report and videos and HERE to listen to the full Podcast and Notes on the Speakers.

This is a research Database of English, Irish, Scottish, Welsh and other European Adventurers in Gran Colombia (modern day Ecuador, Colombia, Panama and Venezuela) during and after the Latin American Wars of Independence (c.1810-c.1830). There are 3,000 men and women listed!  The first one arrived in Venezuela in 1811; the last died in Ecuador in 1890. Over half were Irish. Several thousand died quickly upon arrival, or returned home just as soon; several hundred stayed and settled in Gran Colombia.

The database was constructed by Prof. Matthew Brown as part of the research for his book Adventuring through Spanish colonies: Simón Bolívar, Foreign Mercenaries and the Birth of New Nations, Liverpool University Press, 2006; translated into Spanish by Katia Urteaga Villanueva and published by La Carreta Editores as Aventureros, mercenarios y legionarios extranjeros en la independencia de Colombia, 2010. It contains information relating to the adventurers’ dates of birth and death, nationality, occupation and military service, amongst other information. It may be of use or of interest to social, cultural or military historians of Latin America and Europe, and to family historians more generally.  Read more and access it freely just clicking HERE.

A good starting point to research the presence of Spanish Americans in the British Isles is the book by Pam Decho and Claire Diamond (eds.), Latin Americans in London: A Select List of Prominent Latin Americans in London, C.1800-1996 (London: Institute of Latin American Studies, 1998).  Read by clicking HERE the introduction by Prof. Rory Miller, a member of our network who has gone to the trouble of highlighting with bold type in the text the names of some key individuals.

The National Trust Tyntesfield is full of  evidence of family links with the global Hispanic world. So much so that we have dedicated a full page to just give you an overview. Click HERE to learn more.

The Hispanic-Anglosphere in the island of Jersey

Jersey Archive holds a wealth of resources relating to the Hispanic-Anglosphere. Many relate to the themes of Exile and Migration and Trade and Investment. Shipping and shipbuilding have been the principal activities of this island nation until the 1860s, mainly on the back of the Atlantic cod trade. The first large scale commercial shipyard was built in 1815. Jersey was the 4th largest ship building area in the British Isles in the 19th century. The industry benefited from the Island’s tax-free status, being able to import timber more cheaply than competing British shipyards. From 1820 the Jersey economy was boosted by the first real inflow of immigrants, largely retired military offers, half pay officers and senior officials from both the British Isles and the global Hispanic world.

Lists of all records can be accessed via the catalogue of the Jersey Heritage website ; some have been digitalised and can be consulted fully online. The rest are available at the archive in St. Helier. Here are just a few examples:

Accounts of financial assistance given to Spanish and Italian refugees living in Jersey by the British Government.

Copies of correspondence from agents in Alicante to Nicholas Fiott concerning cargos, prices and sales of goods

Draft copy of a letter to Elizeé Tupper, Guernsey concerning the potential establishment of a trade house in Alicant[e] 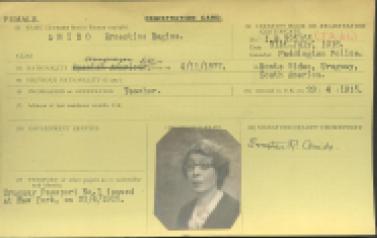 Letter from Enriqueta Janvrin, Montevideo, to her ‘dear and respected mother’, concerning family news of the murder of her brother in law, Doctor Florencio Vanela, editor of the Commercio del Plata newspaper and the subsequent troubles of the family with the paper