Oddity and sacrifice after exile in Jersey 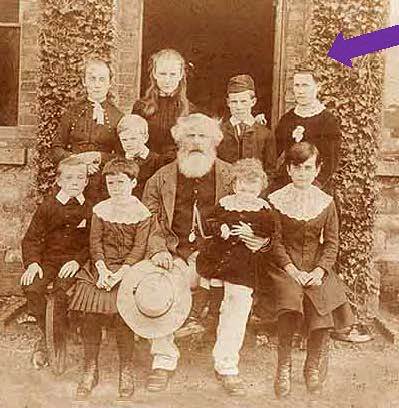 In the top right hand side of this picture you can see Dora Cleopatra María Lorenza de Orellana (1847-1927) who was born in the Channel Island of Jersey. She was the daughter of Ignacio de Orellana, a Colonel in the Spanish army that became a political refugee in the aftermath of the Spanish liberal trienio  (1820-1823). Jersey Archive holds records of financial assistance given by the British Government to Spanish political refugees living in the island between 1828 and 1831 including de Orellana. Dora was recorded as a four year old, residing at Fernando Po Cottage, Dorset Street, St Helier on the 1851 census. She met and soon married the Reverend Ralph William Lyonel Tollemache (centre in the picture) an eccentric widower on 22 February 1869. He extended his family surname to become Tollemache-Tollemache. Ralph was already father to at least five children from his first marriage. He and Dora added 9 more, all with extraordinarily long first names as well as having the double surname of Tollemache-Tollemache. The children are listed here in order of birth:

According to a surviving family member, Susan F. Tollemache, the image in this page was taken outside the vicarage at South Witham in Lincolnshire on 7 October 1889. The sixth child, Leo Quintus de Orellana Tollemache-Tollemache (front row left in the photo) had been born ten years earlier in the same location where his father was acting vicar. Leo was to become one of the first casualties of the First World War. He fought as a volunteer (at the age of 34) with the rank of captain in the 1st Battalion of Lincolnshire and was declared ‘missed in action’ on 1st November 1914. His body was never found, but his name is among those listed in the Ypres (Menin Gate) Memorial  (https://www.cwgc.org/find-war-dead/casualty/1626624/tollemache,-leo-de-orellana/ ).  His younger brother Leone Sextus (middle row on his own in the photo) fought with the Leicestershire Regiment, but he was attending as Brigadier Major to the 3rd Australian Brigade, 1st Aust. Division when he was also killed on 20 February 1917. He was buried at Dernancourt Communal Cementery in the Somme, France where his name can also be found listed in a memorial (see https://www.cwgc.org/find-war-dead/casualty/427534/tollemache,-leone-sextus/ ).

How to cite: To cite from this page, please use any style (Chicago, Harvard, etc). Our preferred citation form is: Trude Foster and Graciela Iglesias-Rogers, ‘Oddity and sacrifice after exile in Jersey’ , Exploring the Hispanic-Anglosphere, an online exhibition – The Hispanic-Anglosphere: transnational networks, global communities (late 18th to early 20th centuries), project funded by the AHRC and the University of Winchester in partnership with the National Trust, [https://hispanic-anglosphere.com/online-exhibitions/oddity-and-sacrifice-after-exile-in-jersey, accessed – please add the date of your visit].